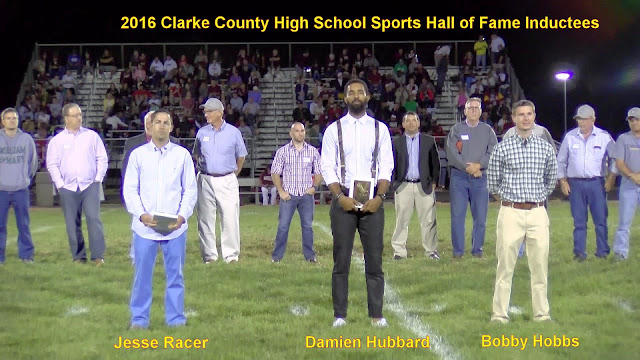 Hall of Fame Induction at Clarke County High School – Class of 2016
Three athletes who all played on State champion teams or were all State first team became the newest members of the Clarke County Athletic Hall of Fame.  The Hall was begun in 1990, and in its 26th year, it has 160 members.  A pre-game reception, sponsored by the Bank of Clarke, was held before the Handley vs. Clarke County game at Wilbur Feltner stadium; during halftime ceremonies the inductees were also recognized.

The injury prevented Bobby from competing in cross country or basketball during his junior year, but he returned for the soccer season, scoring a single-season record 28 goals on the way to his team’s State title.  Bobby’s performance in 2005 earned him Bull Run District and Region B First Team honors.  He was also named Winchester Star Boys’ Soccer Player of the Year.

Hobbs completed his high school career by being named Winchester Star Leadership Award winner.  He attended Elon University, majoring in business administration.  After college, he returned to Clarke County and worked in the lending department at the Bank of Clarke County.  He currently lives in Lexington, Virginia, with his wife Megan and works as a commercial lender.

Damien Hubbard, Class of 2002
Hubbard played basketball all four years of his high school career and started on the football team his senior year as the team’s quarterback.  It was as a member of the basketball team he received his recognition.  His sophomore year he placed on Bull Run District, second team.  Junior year he was first team Bull Run District, second team Region B, and first team All-Area for both the Winchester Star and Northern Virginia Daily.  His senior year was outstanding.  He scored 44 points in one game, a school record, and finished his career with 1362 points, the second leading scorer in school history.  Along with this he was recognized as Winchester Star Player of the Year, Northern Virginia Daily, Player of the Year, Bull Run District Player of the Year, first team Region B, and first team All State.

Hubbard continued his basketball career by playing for Frederick Community College for two years, followed by two years at Liberty University, graduating with a teaching degree. He played professional basketball in Italy and Qatar.   He currently is a Special Education teacher in the Lynchburg School System.

Jesse Racer, Class of 2006
Racer was a member of the school’s track team all four years of his high school career, lettering each year as a long jumper and triple jumper.  He placed at Districts and competed in the Region B meet his sophomore, junior, and senior years.  Jesse was a standout basketball player all four years.   His team was Bull Run District champions his junior year, with Racer as a starter.  His senior year, Clarke County took Bull Run District, Region B, and the school’s first Single A State title.  Racer led the area in scoring, with a 15.8 points per game average; topped the list in three-point scoring (83 three pointers); and tied for the lead in steals (30, or 2.5 per game).  He was honored as Winchester Star, First Team, Bull Run District Player of the Year, First Team, Region B, All-Area, First Team,  and Single A, VHSL First Team All-State.  In addition, he was honored by being named to the Washington Post All-Metro team.

Jesse graduated from Virginia Tech in 2010 with a degree in computer engineering.  He moved to Charlotte, NC after graduation  with his fiance’ Taylor Blanding  and continues to stay involved in basketball by participating in YMCA leagues and whenever possible he plays in pickup games.

Thanks to Coach Nancy Specht for this write up
Posted by Clarke County Sports at 2:25 PM