LANDOVER, Md.- The Washington Redskins held off a determined Carolina Panther team Sunday at FedEx Field capturing their third win of the season with a 27-23 victory.

The win snapped a 6 game losing streak to the Panthers, the Redskins last defeated Carolina on November 28, 2006 at FedEx Field 17-13. The Redskins  hold an 8-6 series lead.

"You're going to face adversity and we have to meet it. It was great to see our guys bounce back after a tough performance on Monday night on a short week against a very talented and very well coached Carolina Panther football team, so I'm happy," Redskins coach Jay Gruden said. "You know, [we're] 3-2 right now and we faced adversity throughout the game but everybody kept fighting and stayed together, stayed positive and finished the game. "

Adrian Peterson had a big day rushing for 97 yards on 17 carries, playing through pain that was evident, many of his team mates commented on how dedicated, and what a professional Peterson was.

“It’s definitely mind over matter, in a game when you usually have to bite down and put your best foot forward. Peterson said, "That’s what I did, I already had made up in my mind by Friday, ‘Hey I’m going to give it a go,’ and I know its going to be painful but it’s mind over matter and keep pressing. So that’s what I ended up doing.”

Josh Norman grabbed his first interception of the year, after coming under massive criticism after Monday's loss to New Orleans.

“It’s crazy. It’s fitting that, you know, that we break that little streak against them, the team that I was with. I guess we’ve got a flare for dramatics somehow." Norman said.

The Redskins will now start preparing for their biggest rival the Dallas Cowboys. The Boyz come in to FedEx Field next week and are set for a 4:25 Kick off on the Fox National Game of the Week.


Game Photo's by Doug Aylestock can be viewed at 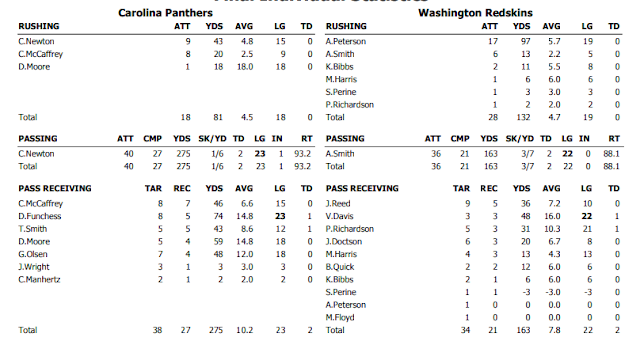