BERRYVILLE, Va.- Clarke County Eagle senior Bryan Wallace announced yesterday via twitter that he has made a verbal commitment to play football next season at the University of  North Carolina Charlotte.

Wallace who had been sought after by several D1 schools visited UNC Charlotte last month and impressed the coaching staff, who in turn offered Wallace a scholarship immediately following the camp.

Wallace will become the first Eagle to receive a D1 NCAA Football scholarship in the school's history.

The 49ers play in the East division of Conference USA and are coached by Brad Lambert who goes into his sixth season as head coach and has built the program from scratch.

The 49ers entered the FBS Conference USA last year and played the prior two seasons as an FBS Independent. Lambert has been an assistant at Wake Forest, Marshall, Georgia and Oklahoma.


Wallace has been named the Winchester Star's Male Athlete of the Year the past two seasons and has a long list of awards and has been named to several VHSL State, Conference and District teams. In addition Bryan is a 3 time consecutive State Wrestling Champion and has posted some of the most impressive grappling statistics in the state.

"I am very happy and proud of this young man! UNC Charlotte is getting a great football player and even a better person." Clarke County football coach Chris Parker said. 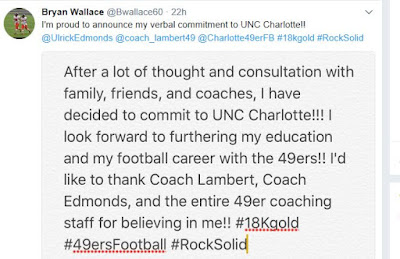