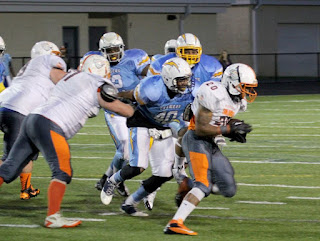 PURCELLVILLE, VA- After a ninety minute lightning delay, the Harrisburg Sharks rode out the storm and defeated the Virginia Chargers 18-14 in the Atlantic Football Association's Championship Bowl V. 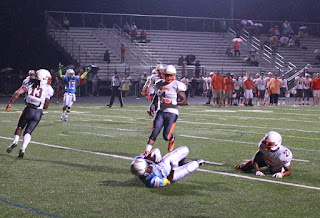 Both teams entered the game undefeated with the Chargers (13-1) having played at their home stadium, Wolverine Stadium at Woodgrove High School for five consecutive games.

The Sharks (13-0) jumped out to an early lead before yielding to the Chargers just before half. The Chargers held a slim 14-12 lead when heavy rains set in just before the end of the first half.

The half was shortened and the only score came in the second half as the Sharks regained the lead and were able to hold off a valiant charge by the Chargers.

Video Highlights on the Clarke County Sports Game of the Week