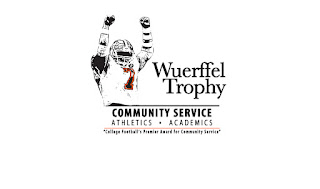 The Wuerffel Trophy, known as “College Football’s Premier Award for Community Service,” is presented annually by the All Sports Association in Fort Walton Beach, Fla. Named after College Football Hall of Fame quarterback and 1996 William V. Campbell Trophy recipient Danny Wuerffel from the University of Florida, the Wuerffel Trophy is awarded to the FBS player that best combines exemplary community service with athletic and academic achievement.

The Atlantic Coast Conference led all conferences with 15 players appearing on the 2015 watch list. Following the ACC are the Big-12 with 10 players, the American Athletic and Sun Belt with nine each, the SEC and the Pac-12 with eight each, the Big Ten and Conference-USA with five each and the MAC and Mountain West following with four each. All FBS Conferences are represented on the list, as were Independent representatives Notre Dame and Army West Point with two and one nominees, respectively. There are 13 nominees who were underclassmen in 2014 that are rejoining the watch list again this year.

Voting for the Wuerffel Trophy is performed by a National Selection Committee that includes college football television and print media, industry notables, former head coaches and prior Wuerffel Trophy recipients.


Nominations for the Wuerffel Trophy are made by the respective universities’ Sports Information departments and will close on Oct. 15. A current list of nominees can be found at www.wuerffeltrophy.org.

Semifinalists for the award will be announced on Nov. 3 and finalists will be announced on Nov. 24. Formal announcement of the winner will be on Dec. 8 at the National Football Foundation’s Annual Awards Dinner press conference at the Waldorf Astoria in New York City.
The presentation of the 2015 Wuerffel Trophy will occur at the 47th Annual All Sports Association Awards Banquet on Feb. 12, 2016 in Fort Walton Beach, Fla.
Past winners of the Wuerffel Trophy are: Rudy Niswanger* (LSU-2005), Joel Penton (Ohio State-2006), Paul Smith** (Tulsa-2007), Tim Tebow* (Florida-2008), Tim Hiller** (Western Michigan-2009), Sam Acho* (Texas-2010), Barrett Jones* (Alabama-2011), Matt Barkley**(USC-2012), Gabe Ikard** (Oklahoma-2013) and Deterrian Shackelford (Ole Miss-2014).
The Wuerffel Trophy is a member of the National College Football Awards Association (NCFAA) which encompasses the most prestigious awards in college football. The 22 awards boast more than 700 years of tradition-selection excellence. Visit www.NCFAA.org to learn more about our story.
Beginning in 2015, The Home Depot College Football Awards will have a new home at the National Football Foundation’s College Football Hall of Fame and Chick-fil-A Fan Experience in downtown Atlanta. Airing live on ESPN on Dec. 10, 2015, college football’s brightest stars will be honored for their performance on and off the field.
The members of the NCFAA are unveiling their preseason watch lists over an 11-day period this month. Sixteen of the association’s 22 awards select a preseason watch list and the NCFAA has spearheaded a coordinated effort to promote each award’s preseason candidates.


To read the entire story online at the