This Week in College Football History

This Week in College Football History:

As part of an ongoing series throughout the fall, The National Football Foundation & College Hall of Fame posts This Week in College Football History, which takes a look back at some of college football's landmark moments over the last 141 years.

If you choose to use this content in whole or in part, as a courtesy, please credit The National Football Foundation & College Hall of Fame.

September 1, 1984- College Football Hall of Famer LaVell Edwards' BYU team kick-started its national title chase with an upset of No. 3 Pittsburgh and Hall of Famer Bill Fralic with a 20-14 shocker in the Steel City. It was the first live, regular season college football game ever televised by ESPN. Cougars quarterback Robbie Bosco threw for 325 yards, including a 50-yard touchdown strike to Adam Haysbert with 1:37 remaining. The victory jumped BYU from unranked to No. 13 en route to their first national crown.

August 30, 1997-  William V. Campbell Trophy winner Peyton Manning tossed a Tennessee record-tying five touchdown passes as the fifth-ranked Volunteers beat Texas Tech, 52-17, in Knoxville. Only up 10-3 with 1:37 to go in the half, Manning torched the Red Raiders for two touchdown passes in 13 seconds to take a 24-3 lead into the half.

August 31, 1994- No. 7 Arizona opened the season with a 19-14 win over Georgia Tech in Atlanta. The Wildcats overcame three fumbles and took the lead with 26 seconds remaining on a run by freshman running back Kevin Schmidtke.

September 4, 1976- No. 19 Kansas opened the season with a 28-16 win over Oregon State and new head coach Craig Fertig in Corvallis. Jayhawks quarterback Nolan Cromwell scored late in fourth quarter to put the game out or reach for the Beavers.

September 5, 1992- FCS member The Citadel capitalized on a new rule allowing the advancement of a fumble from any spot on the field, converting a late fourth quarter fumble into the game-winning touchdown over Arkansas, 10-3, in Fayetteville. The Citadel had won five of its last six meetings with FBS opponents. 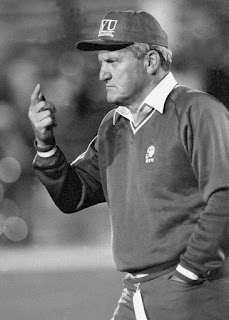 Head coach LaVell Edwards led BYU to its first national title in 1984 and was inducted into the College Football Hall of Fame in 2004.