Eagles exact revenge with shut out to open season

BERRYVILLE, Va.- All summer long the Clarke County Eagles prepared for their opening game just like they always do, except this time something unique was about to happen.

The Eagles opened their 2019 season against the same out of district opponent they played nine months earlier, the Buffalo Gap Bison. A game they lost 32-21and ended their 2018 season.

The outcome was much different this time as the Eagles avenged last years playoff loss with a 42-0 rout over the Bison.

"I'm very happy and very proud of our guys," Eagles Coach Chris Parker said. "We did in all facets of the game tonight some very good things."


The Eagles scored on all of their drives and held the Bison to 156 yards rushing on the night. The Eagles racked up 300 yards on the ground and another 100 in the air. Peyton Rutherford scored the Eagles first touchdown of 2019 on a 28 yard run. Rutherford ended up with 159 yards on 17 carries and two touchdowns. 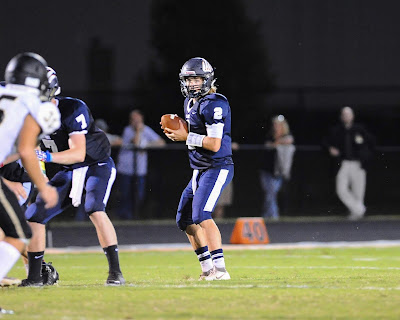 Quarterback Colby Childs had a solid night going a perfect 4 for 4 passing for 100 yards including a 46 yard touchdown pass to Danny Lyman. Childs also rushed for 41 yards on six carries and scored twice on runs of 3 and 6 yards.Lyman had a solid night playing offense, defense and special teams. Lyman had 38 yards on three carries, 2 receptions for 82 yards, 19 yards on a kick off return, 4 tackles and a pass defended.

"It was just a team win and I couldn't be more proud of our team." Childs said.


The Eagles defense was just as impressive with Cody Sowers leading the way with 11 tackles.
Sam Brumback added 10 tackles and Neal Mitchell posted 8 to lead the Eagles defense.

After leading 28-0 at the half the Eagles played most of the second half with a running clock. (VHSL runs the clock if a team is up by 35 points in the second half). Luke Leso went in from 6 yards out in the fourth quarter to round out the Eagles scoring.

The team has it's bye next week and will travel to Standardsville to face the Green Dragons of William Monroe. Kickoff is scheduled for 7:00 PM

Enjoy our video productions from the game below