LANDOVER, Md.- The Washington Redskins returned to FedEx Field to start their 2019 campaign dropping a 23-13.

Case Keenum and Dwayne Haskins split most of the time with Jalen McClendon finishing up the game.

"I thought we did some good things, Keenum said. "Again, I think there were some negative plays that kind of stopped our drives. There are always going to be some plays I want back and there's a few plays that I definitely want back, but I thought we did well"

Keenum started and ran the first several drives going 3 of 7 for 52 yards. A couple drives showed promise but were stalled by the Bengal defense.

Haskins came in and had the most playing time, splitting time between the first and second half. Haskins was 7 of 14 with a 55 yard touchdown pass to Robert Davis. The touchdown was the first of Haskin's NFL Career.

"It was exhilarating. I enjoyed it. It was fun. I will never forget it. It was exciting for me." Haskins said. "I was more proud of what happened pre-snap than anything. I did a hard count, had rotation late and flipped the protection. I still got hit but Rob [Davis] did a great job of getting open. The corner and cover safety was low. I saw him back pedaling pretty slow and told him that I was throwing deep. He caught it and scored a touchdown. I wasn’t worried about getting hit. After he scored, I was excited."


Redskins defensive back Montae Nicholson got the Redskins on the board first with an electrifying 96 yard interception off Andy Dalton, Nicholson raced up the Redskin sidelines with blazing speed.

The score was  tied 13-13 late in the game when the Bengals broke it open with a punt return for a touchdown. The second week in a row the Redskins special teams have yielded a score.

"We have to look at the punt number one. How was it? Was there any hang time? Was it just a line drive to [Alex] Erickson, who is a heck of a punt returner," Gruden said. "The coaches do a great job out there. [Special Teams Coordinator] Nate [Kaczor] will do a good job of checking it out and getting them better."

Adrian Peterson led the Redskins rushing with 31 yardsThe coaches do a great job out there. [Special Teams Coordinator] Nate [Kaczor] will do a good job of checking it out and getting them better." on 4 carries including a 26 yard rumble to start the game.

Colt McCoy did not play but is still in the quarterback picture. When asked about the quarterback situation Gruden replied, "I’m good right now. I think we have a lot of time still to get these guys back and recover. We'll come back Sunday ready to roll – Sunday, Monday, Tuesday, Thursday. And then we still have another few days before our last preseason game. I like where we’re at and where we’re headed. " 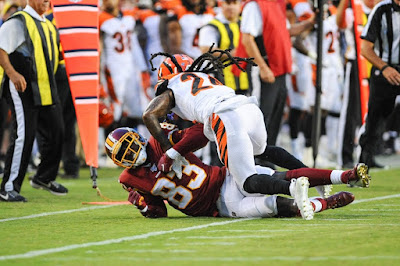 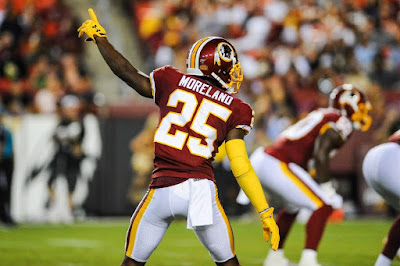 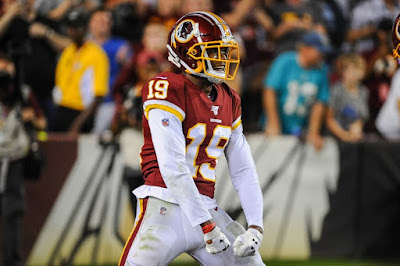 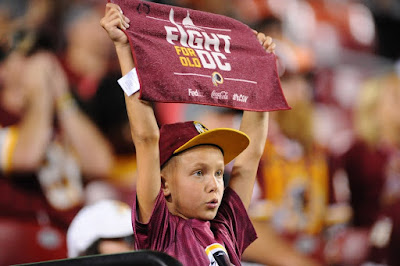 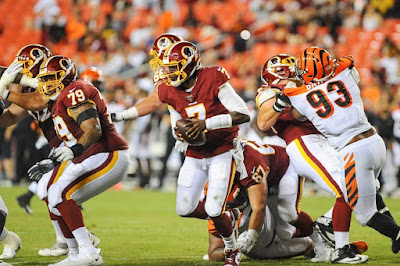 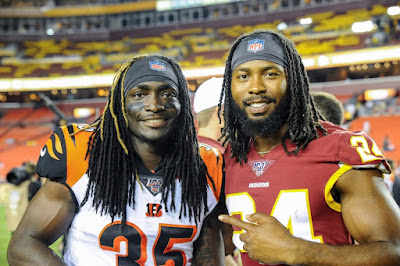 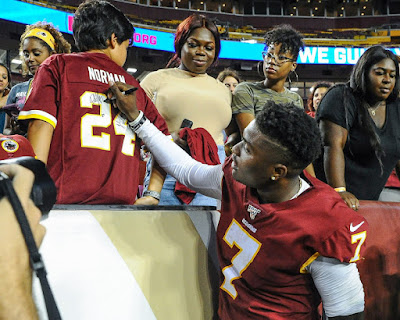