STERLING PARK, Va.-  The Clarke County Eagles (0-1) opened their 2018 season on a field that will not see many if any more Friday night football games.

The Eagles faced the Dominion Titans (1-0) at Park View High School, due to the fact Dominion's field is undergoing conversion to artificial turf and was not ready for their home opener so the game was played at the crosstown Patriot's Stadium. With Dominion coming out on top with a 25-14 win.

Last year the two teams opened their seasons in Berryville with the Eagles pulling a stunning 39-24 upset after trailing at the half.

The Titans were able to pull away in the 4th quarter scoring two touchdowns, even a bad snap on an extra point turned into a two point conversion the Titans.

Dominion took advantage of good field position and scored a field goal on their opening drive.

Clarke then put together two impressive drives with quarterback Colby Childs hitting Kyle Baylor, who went high and made an athletic catch at the one and went in for the Eagles first score.

"We came in as underdogs, nobody gave us a chance," Childs said. "We all played hard and Kyle [Baylor] made a great play on the touchdown pass."

The Eagles got their other score at the end of the first half when Peyton Rutherford burst in from the 2 yard line.

The Eagles coaching staff used good clock management stopping the clock at 2 seconds after a Childs scramble to the ball to the 2 yard line.

Rutherford ended up with 83 yards on 26 carries and 1 td. The leading rusher for Clarke also had several good plays on the Eagles defensive side of the ball.

Running back Kyle Baylor also performed well going both ways and returning punts and kicks. Baylor 52 yards on 10 carries and caught 4 passes for 56 yards and one touchdown.

Hydration became an issue for both teams midway through the quarter with several key players missing some downs.

"Hydration is not something you can get around by conditioning," Parker said. "Our guys are in great shape and we have been conditioning very hard but they gave it everything they had and it took it's toll, but our guys never stopped." 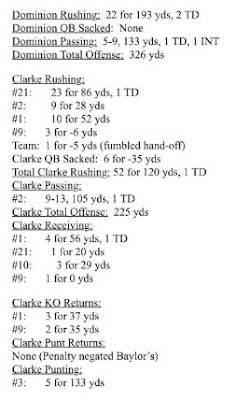 The Eagles were supposed to travel this week to Manassas Park. That game has been cancelled due to the fact Manassas Park cancelled their season for lack of participation. The Eagles will play West Point on the final week of the season, their original bye date.

The Eagles, off this week will return to home to "the Felt" on Friday September 7 to host the Handley Judges who defeated Warren County 15-14 in a thriller at the Handley Bowl. Kickoff is 7:30PM