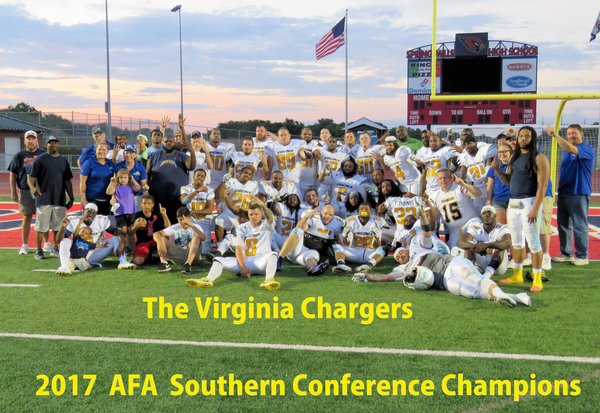 The Chargers went down early, to the Virginia Storm, as the Storm connected on the second play from scrimmage for a long touchdown pass to take an early 7-0 lead.

The Chargers drove down and got on the board with a Alhaji Kanu field goal, but a penalty kept the drive alive and the Chargers took the three points off the board and were held on a goal line drive. It appeared the Chargers scored when AFA leading rusher Michael "Moo" Roberts stretched the ball out, but did not get the call.

"I know I scored, I stretched the ball over." Roberts said.

After a couple of exchanges the Storm hit another long pass on a broken play and went up 14-0.

Momentum changed when the Storm where driving and pressure from Earl Babcock, A.J. Orlebar and Seth Rocca forced an errant throw that was picked off by Charger defensive back Tavan Mair.

Roberts scored from one yard out to pull the Chargers within seven shortly before the first half.

The Chargers got two rushing touchdowns from quarterback Dominique Terrell in the second half  to give the Chargers the Championship.

The win revenged the Chargers earlier season 14-0 loss to the Storm in Danville. The loss was the Chargers only loss so far this season.

"We went down early and made a couple mistakes," Sherman Thomas said, "We just got back to being a family. We started out slow last week and came back."

Thomas had back to back stops on a late drive by the Storm that would have tied the game up, he broke up a pass and then on the next play stopped a reciever short of a first down forcing a turnover on downs and giving the ball to the Chargers with less than  three minutes to play.

Thomas also gained close to 100 yards on kickoff returns helping to set the team up with good field position.

Terrell was able to pick up a first down rushing and the Chargers were able to run out the clock.

The win places the Chargers in their third consecutive AFA Bowl. They will face their biggest rival the Maryland Phantoms in Baltimore (7:00PM).

The Chargers defeated the New River Nitro last year and lost to the Harrisonburg Sharks in 2015.