Chargers capture Southern Conference, move to 13-0 prepare for the Sharks 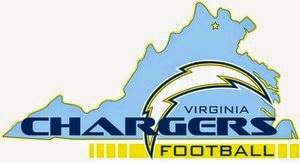 PURCELLVILLE, VA- The Virginia Chargers moved to 13-0 as they knocked off the Virginia Vengeance for the second time this season capturing the Atlantic Football Association's Southern Conference Championship with a 42-12 victory.

Richard "Mouse" Myers put the Chargers on the board first and in the lead to stay with a diving touchdown catch from Brandon Hyler and the Chargers never looked back.

Dale Taylor and Kenny Griffin each had a touchdown reception, and Michael "Moo" Roberts scored twice on the ground.

Dwayne Foddrell had two interceptions, one for a touchdown to round out the Chargers Scoring. Alhaji Kanu was 6 for 6 on P.A.T.'s.

The Chargers will host the AFA Northern Conference Champions the Harrisburg Sharks. The Sharks come in to Wolverine Stadium at 12-0 and will face the 13-0 Chargers. Game time is 7:00PM on Saturday June 20 at Woodgrove High School in Purcellville VA.