Virginia Chargers remain undefeated as they start their playoff run 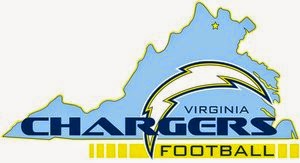 BLUEMONT, VA- The Virginia Chargers (6-0) remain undefeated as they posted another shutout at the hands of the Mid-Atlantic Raiders 39-0 at Stanton Field in Washington D.C. on April 25th.


The Chargers remain tied for first place in the Southern Division of the Atlantic Football Association with the Virginia Vengeance (7-0) in spring minor league football.


The Chargers will host the Germantown Gladiators (2-4-1) of the AFA Northern Division  this Saturday at their home stadium, Wolverine Stadium at Woodgrove High School , Purcellville VA. 7:00PM.


A first place showdown with the Virginia Vengeance is setting up as the Vengeance will make the trip from Virginia Beach to Purcellville on May 23.


The strong start can be attributed to both coaching and production on the field.


"We feel very fortunate to have such a strong coaching staff with Donnie Rowland, Troy Wilt, Scott Dinant, Didymus Tate, and Dusty Hogbin," Owner and Head Coach Louis Simmons Sr. said. "Without their time and dedication we wouldn't be as strong in all areas as we are."


The Chargers defense has posted four shutouts in six games yielding only 32 points in their six victories.


Scott, a 2002 Handley Judge, is in his ninth season and was a standout back when the Winchester Tigers were playing at Feltner Stadium in Berryville and has been a rock with the Chargers.


The Chargers offense has been equally impressive scoring 149 points in six games averaging 25
points per game.


Special teams have played consistently adding to a successful all around team effort.

"Our Special Teams kicker Alhaji Kanu is having an outstanding season and is still looking forward to get to the next level." Simmons said.


The Chargers are hoping to use the fact that many local players from previous area schools are on the team and an undefeated season will help them to increase attendance at home games.

The Chargers are also very active in giving back to the community through out the season and in the off season the coaches and players give back to the community with Toy for Tots game in December each year, assist with a fundraiser with South Hagerstown High School football program and multiple year football programs as coaches and holding clinics.