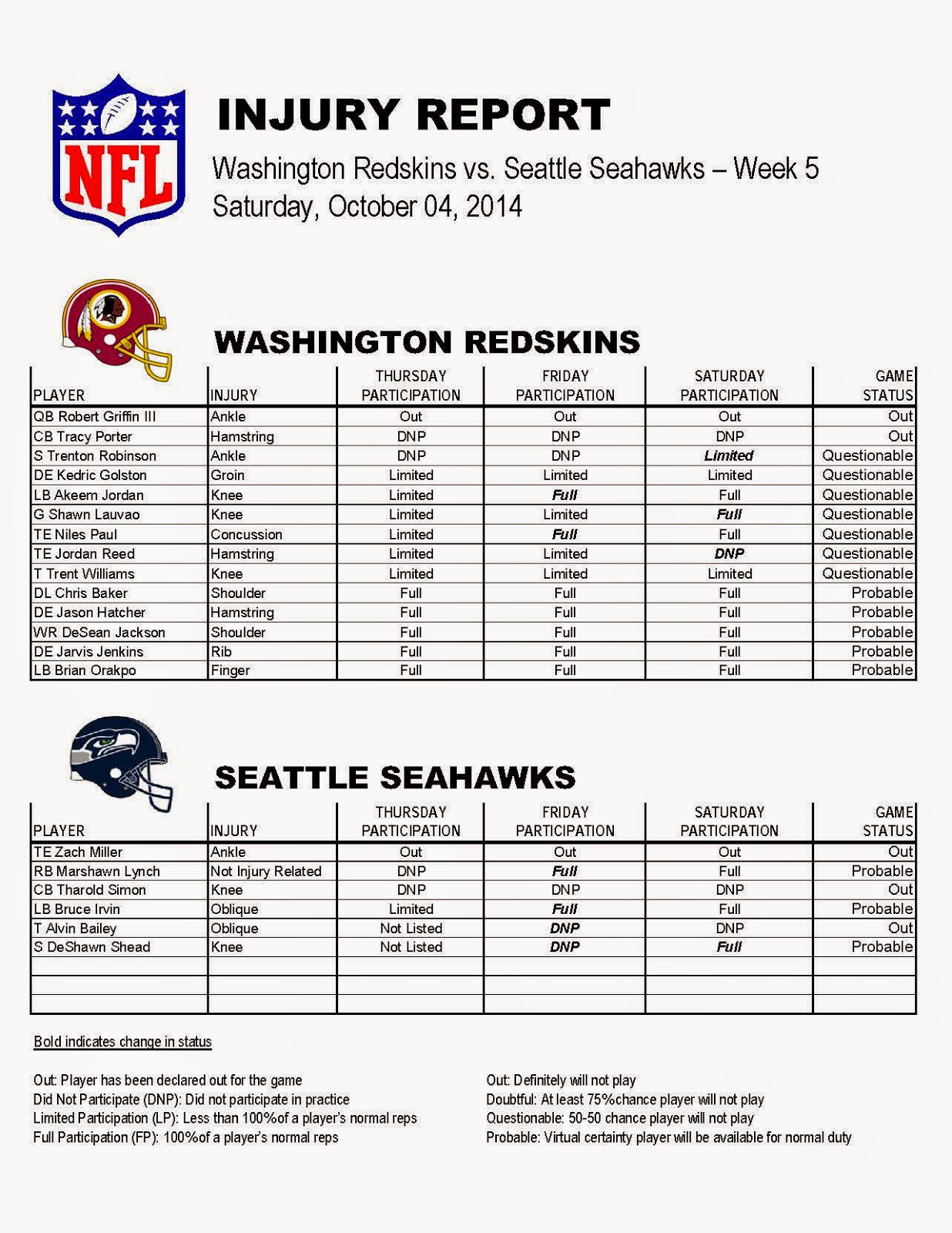 On the injury report:
“Tracy Porter will be out. He did not practice. Obviously, he’s out. Trenton Robinson was limited. He’ll be questionable. Kedric Golston was limited. Akeem Jordan was full. Shawn Lauvao was full. Niles Paul was full. Jordan Reed did not participate today. We’re going to make sure he gets another full day of rest and we’ll evaluate him tomorrow again. Trent was limited – Trent Williams. And then everybody else was full – Chris Baker, [Jason] Hatcher, DeSean [Jackson], Jarvis [Jenkins] and Rak [Brian Orakpo].”

On if there is a chance tight end Jordan Reed could play:
“There is a chance. We’ll see him tomorrow. Today we didn’t want anything worse to happen, so we’re going to take a look at him tomorrow, do a nice workout and go from there.”

On if Reed had a setback:
“No, he feels OK. It’s just I know how these things are, so we are just going to take it another day and give him another day of rest and evaluate him tomorrow.”

On if Reed has run full speed:
“He’s been running, but full speed I can’t tell. I haven’t seen him run in a long time. I don’t know what his full speed is right now. That’s what we’re going to look at tomorrow and see what he can do, let him stretch it out a little bit and if he doesn’t feel like he can run full speed then obviously we’ll hold him out. But we’ll take a look at him tomorrow. It’s 50/50 – that’s what questionable is.”

Of if he thinks prime-time games can affect a player’s body clock:
“I don’t think so. I don’t know. I haven’t found that to be the case. The little experience I’ve had with the late night games in Cincinnati and here, we’ve only had one – well, we had the ones in the preseason and we were fine – so I don’t know if that’s an issue. I just think Thursday night, prime-time game against the Giants, we just didn’t play very well, we were a little bit beat up and the Giants came and took it to us. We’ve just got to understand that that’s the type of game we’re going to play every week and we have… to take it to somebody and not get it taken to us. So [it’s] very important for us to come out, play some physical football, play the way we want to play and worry about the results when they happen.”

On if he attributes quarterback Kirk Cousins’ mistakes to his mindset or his youth:
“I don’t know. Every interception is different. I think his mindset’s fine. You’ve just got to play and he’s got to see the looks, and some of them are going to happen. Guys are going to throw interceptions. If you throw the ball 35-40 times a game, you’re going to throw an interception or two every now and then. The big thing is you bounce back and you don’t force the issue the next one. You’ve got to learn from it and move on and continue to compete. And that’s what he’s going to do – that’s what he’s done all week. He’s competed, and learned from them, and studied the game plan. The Giants game is totally out the rearview window right now. We’re not even worried about the Giant game anymore. All we’ve been focusing on since Tuesday is the Seattle Seahawks, and he’s done a great job preparing for what type of defenses he’s going to see and how accurate and how good he’s got to be in the pocket moving forward. I think his mindset’s OK. I don’t think his confidence has been shaken, but we’ll see come Monday.”

On if he believes the Redskins were overconfident going into the Giants game:
“I think they’re OK. It’s not so much they were overconfident, I think. I just think the stress has been that we need to make sure that we play hard all of the time – all the time. First quarter, second quarter, third quarter, fourth quarter – we have to continue to compete on every down, everybody. Not just one group – not just the defense, not just the offense, but everybody’s got to compete every down, and hopefully they understand that. Because every team in the NFL’s got talent – some teams have a little bit more than others – but the fact of the matter is all 31 teams can come in here and beat us on a given day, and I feel like we could beat all 31 teams. It’s just a matter of we need to make sure we compete, protect the football, and when adversity strikes we’ve got to hang in there and move forward.”

On if he’s a fan of the layoff from a Thursday night to a Monday night game:
“I was fan of it after the Thursday game. I needed a couple days off after that one, and I think our team needed a couple days. The negative on a Thursday: you don’t feel like your team’s ready to go after the Sunday game, but the positive is you get a couple extra days of recovery time for the next game. We used that as a positive, the extra couple days – gave them [the players] a couple days off, gave the coaches a couple days off, and then came back fresh and ready to roll, and the players got in the treatment room – the ones that needed it – and the majority of them have used that to their benefit. They all feel good and fresh, and hopefully that will pay off come Monday.”
Posted by Clarke County Sports at 10:13 PM