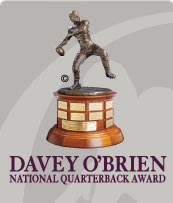 FORT WORTH, Texas - The 2010 Davey O'Brien National Quarterback Award® (The O'Brien) Marquee Match-up for week one features two O'Brien Watch List candidates as they go head-to-head in the most anticipated opening game of the season.

Throughout the season, The O'Brien will highlight the best weekly quarterback match-up as the race for the oldest and most prestigious national quarterback award continues. Quarterbacks from all 120 NCAA Division I Football Bowl Subdivision (FBS) schools are eligible for the award until the field is narrowed to 16 semifinalists on Monday, Oct. 25.

Marquee Match-up: No. 3* Boise State vs. No. 10* Virginia Tech at FedExField

The Boise State Broncos and 2009 O'Brien Semifinalist Kellen Moore return from their second consecutive undefeated regular season to face off against Tyrod Taylor and the Virginia Tech Hokies at FedExField in Landover, Md. Both teams enter the season in the hunt for a national title and both quarterbacks will begin their campaign for the coveted O'Brien Quarterback Award during primetime on ESPN.

Other Notable Games (based on start times)

About The O'Brien Fan Vote

Fans are invited to cast their vote for the nation's best college quarterback as often as once daily at www.VoteOBrien.org. The Fan Vote counts as 5% during each round of the voting process, and it is combined with the results from The O'Brien National Selection Committee, which is comprised of journalists, broadcasters, commentators and former winners. The 2010 O'Brien Winner will be announced on The Home Depot ESPNU College Football Awards Show airing Dec. 9 on ESPN and will be honored at the 34th Annual Davey O'Brien Awards Dinner held at The Fort Worth Club on Feb. 21, 2011 in Fort Worth, Texas.

The Davey O'Brien National Quarterback Award® (The O'Brien) is presented annually to the nation's best college quarterback and is the oldest and most prestigious national quarterback award. The O'Brien honors candidates who exemplify Davey O'Brien's enduring character while exhibiting teamwork, sportsmanship and leadership in both academics and athletics. The O'Brien is overseen by the Davey O'Brien Foundation, which is headquartered in Fort Worth, Texas, and has given away more than $800,000 in scholarships and university grants to help high school and college athletes transform leadership on the field into leadership in life. For more information, visit http://www.daveyobrien.org./
Posted by Clarke County Sports at 11:02 AM