As part of an ongoing series throughout the fall, The National Football Foundation & College Hall of Fame posts This Week in College Football History, which takes a look back at some of college football's landmark moments over the last 141 years.

September 17, 1988- In Iowa City, 2010 College Football Hall of Fame inductee Alfred Williams led the Colorado defense with seven tackles, four for losses including two sacks, a forced fumble, a recovery, a pass deflection and a blocked punt in a 24-21 win over No. 19 Iowa. Williams' forced fumble late in the fourth quarter ended the Hawkeyes late charge.

September 13, 1980- East Carolina recovered fumbles on five consecutive Louisiana-Lafayette drives in the third quarter, tying an NCAA record for fumbles recovered in a quarter. The Ragin' Cajuns, however, rebounded to win 27-21 in Greensboro.

September 14, 1991- In Ann Arbor, 2010 College Football Hall of Fame inductee Desmond Howard made a diving fourth down catch in the back of the endzone with 9:02 remaining in the fourth quarter to lead No. 3 Michigan passed rival No. 7 Notre Dame, 24-14. The win snapped the Irish's four-game winning streak over the Wolverines.

September 16, 1967- After losing starting quarterback Mike Livingston to a knee injury, the smallest player in the Southwest Conference, 5'4", 149 pound backup quarterback Ines Perez led SMU to a 20-17 comeback win over Texas A&M in College Station. Perez completed 10 of 11 passes for 107 yards in the second half, including a six-yard touchdown strike to College Football Hall of Famer Jerry Levias with four seconds remaining in the game.

September 18, 1976- Brown beat Ivy League rival Yale 14-6 in Providence. Yale quarterback and NFF National Scholar-Athlete Stone Phillips scored the only Eli touchdown in spite of the offense getting past the Brown 30-yard line four times. Brown would go on to win a share of its first Ivy League title.

September 19, 1952- Duke defeated South Carolina 20-7 in Columbia in the inaugural game of the Atlantic Coast Conference. Team captain Howard Pitt caught a 29-yard pass on a Blue Devils scoring drive, and returned an interception 25 yards in the second quarter. The win propelled Duke to capture the first-ever ACC title. 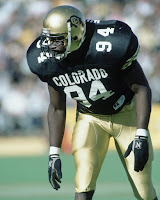 Colorado linebacker Alfred Williams was instrumental in the Buffs upset of No. 19 Iowa in 1988.
Williams will be inducted into the College Football Hall of Fame in 2010. (Photo Credit: CU)
Posted by Clarke County Sports at 2:44 PM